Amazon.ca
out of stock
Check Price

Amazon.com
out of stock
Check Price

Amazon.co.uk
out of stock
Check Price
Last Amazon price update was: February 10, 2021 12:54 pm
× Product prices and availability are accurate as of the date/time indicated and are subject to change. Any price and availability information displayed on Amazon.com (Amazon.in, Amazon.co.uk, Amazon.de, etc) at the time of purchase will apply to the purchase of this product.

The Reebok boxing shoes are perhaps the most popular brand that’s out right now. Ironically they are also some of the most expensive that I’ve seen so far. The Reebok boxing shoes are my very first and only pair of boxing shoes I’ve ever owned. Which my wife happened to buy me as a gift in the summer of 2017. I have been fighting for just about 9 years, and have close to 60 fights combined as an amateur and professional. Every single one of those fights I have, I fought barefoot.

Aside from road work, circuit and/or obstacle course training, I have trained the vast majority of those nine years Barefoot as well. I bring this up because I feel it’s important to understand my context when reviewing boxing shoes. And I also know that they are plenty of fighters out there, such as MMA fighters or Muay-Thai fighters who are interested in developing or competing in boxing but don’t know anything about boxing shoes. For my pure boxers that are reading this article fret not, I have been known to have good hands even compared to other pro boxers. So I’m not out of my element here viewing this product.

I am absolutely in love with the design of the Reebok boxing boots. It’s the same Kind Floyd Mayweather wears when he trains and fights. Although, one thing I do find odd about boxing boots is that they have soles that are narrower in with in the foot itself. It almost makes you feel as if you’re balancing yourself on platforms. The kind I have, comes in Black with red printing.

But it also comes in a variety of colors and textures with the same overall design. I have my eye on the Black and Gold version of these boots.

Anyone that knows me or follows my fighting career knows that I have a fetish for black and gold fight apparel. But as of right now I’m resisting the urge to purchase pair.

Unfortunately, I was always under the impression that these boots will be as easy to put on as running shoes. I’ve seen plenty of other boxers wear boxing shoes (not boots), and were able to put them all without much problem. I was sadly mistaken. For both good and bad reasons, I struggle to put these boots on to this very day. The very first time I attempted to try these on it took me almost 10 minutes, no exaggeration.

Although These Boots feel more like sneakers when you have them on, they are designed like the most heavy-duty utility work boots in regards to Lacing them up and strapping them down. Not only that but these boots are incredibly snug the first time you put them on. It’s very similar to breaking in a new pair of gloves but even more so to the point where I had to keep reassuring myself that I bought the right size.

After putting on each boot which can seem as extraneous as pulling teeth (Seriously, its more tedious than getting your gloves laced up before stepping into the ring). Make sure the tongue of each boot is properly in place, and that the boots are laced as tight as possible by rapping the laces around the boots.

Not properly tying your boots will cause them to sag as you begin to move which can be really uncomfortable. And it’s also due to the fact that the soles of the shoes are narrower than the width of the boots itself. Plus taking these boots off whether you tie them properly or not is just as difficult as putting them on. My feet feel as if they literally get stuck in these boots every single time. Which is good. So it’s best that you put the effort in to tie them right to start. Boxing boots Are Meant to help mitigate the chances of you rolling your ankles while training or a fighting.

As a kickboxer, nothing can compare or replace the feeling of touching the canvas with your bare feet.

But I can imagine those who are brought up primarily in boxing would love the incredible snug and tight feel that the Reebok was provides around your feet, ankles and bottom of your shin. It provides more foot stability then you would get from running shoes for example which I’ve seen other boxers/ Fighters use just solely practice boxing.

The soles of the boxing boots allow you to get a little bit of extra grip on the surface, adding just a small degree of Leverage to your punches. Additionally, also protects the soles on the balls of your feet from getting Raw due to constant pivoting. I also enjoy jump roping with boxing boots more than I do without them. As someone that enjoys doing tricks with jump ropes I would probably be two or three times better with a jump rope if I had practice with Footwear earlier on in my career. I’ve lost count of how many contusions and abrasions I’ve accrued over the years from jumping rope barefoot.

If you’re a practitioner of a combat sport that involves throwing kicks, you may not notice that added balance you get from wearing these shoes the same way a boxing would. Boxers aren’t required to be as flexible in the legs, or used to balancing themselves on one foot the way kickers do.

The Reebok boots doesn’t slow my footwork down per se. They are more lightweight overall then your typical running shoes. But due to the fact that I am used to throwing kicks and maneuvering without Footwear, I am constantly conscious of the added weight and added drag because of the boots. It will only make a difference if you had to worry about kicking your opponent in the face with boxing boots and again it doesn’t slow down your lateral movement.

But to those that have the ingrained instinct of throwing lots of kicks, it may make you feel as if you are training / sparring / fighting in bondage.

In closing, the Reebok boots are an excellent piece of Footwear. The only cripes with the Reebok boots I have, aside from its high price, come from habits and instincts that have been ingrained in my system from being a kickboxer. I have enough colleagues and friends to know that having this pair of boxing boots like these will make you the Envy of your boxing friends. If you are a martial artist that plans on venturing into boxing then I definitely recommend this kind. Is important to train the way you fight and why not get what's top of the line on the market.

Quality
8
Design
9
Usage
10
PROS
CONS
Add your review  |  Read reviews and comments
This review was written by Brima Kamara after several month of training and testing Reebok Boxing Boot-Buck. It was not sponsored or otherwise endorsed by advertisers. 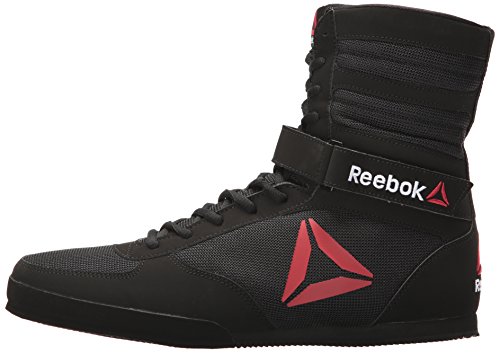 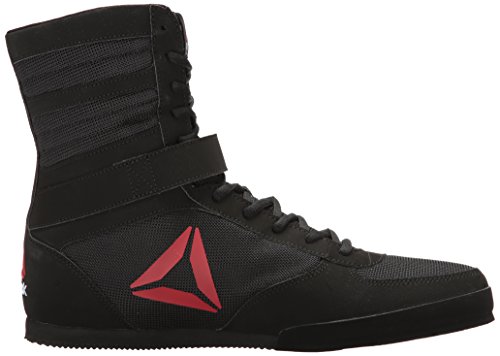 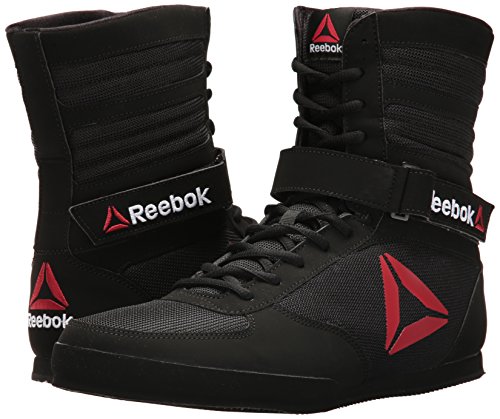 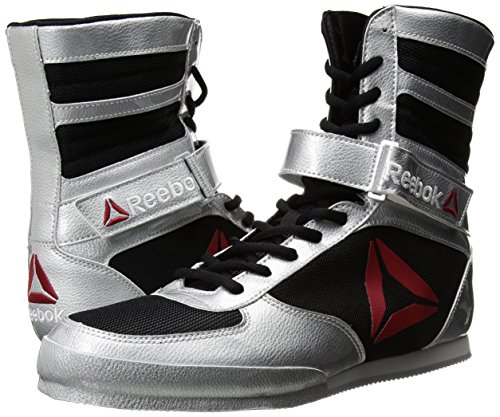 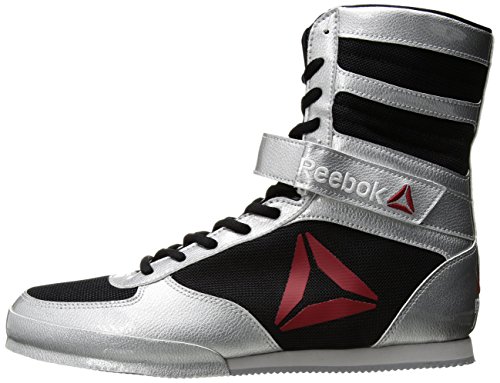 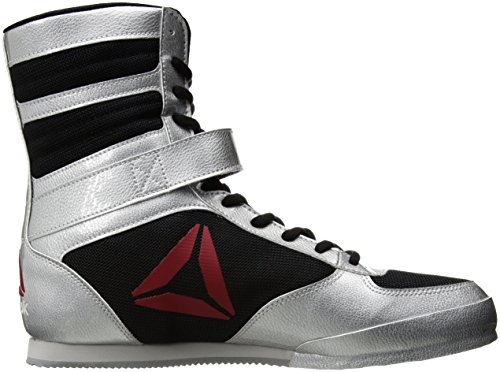 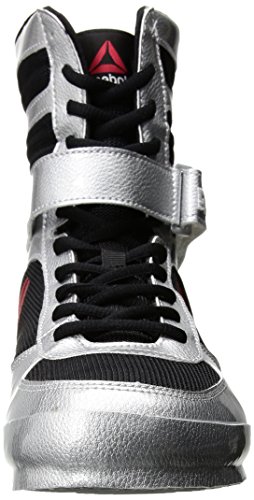 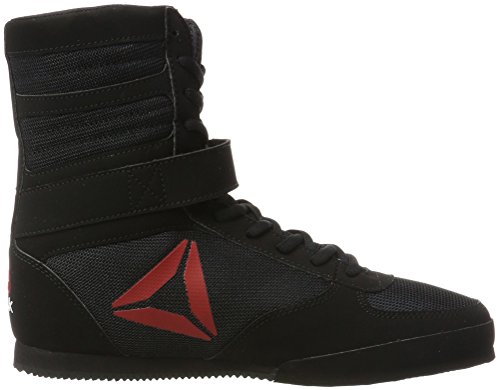 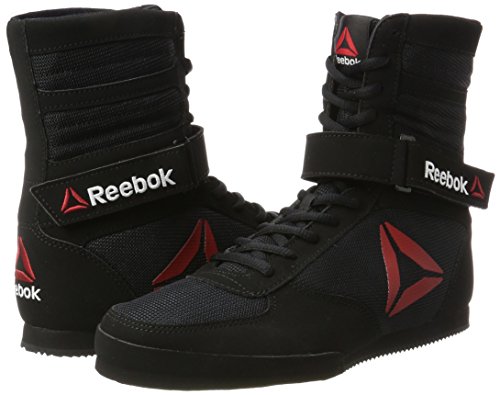 In closing, the Reebok boots are an excellent piece of Footwear. The only cripes with the Reebok boots I have, aside from its high price, come from habits and instincts that have been ingrained in my system from being a kickboxer. I have enough colleagues and friends to know that having this pair of boxing boots like these will make you the Envy of your boxing friends. If you are a martial artist that plans on venturing into boxing then I definitely recommend this kind. Is important to train the way you fight and why not get what's top of the line on the market.