But even though heavy bags are important, they do not provide everything necessary to develop aspects of your striking. One of these drawbacks are usually attributed to the fact that the surface area of the heavy bags run perpendicular to the ground, and the contours of the heavy bag are usually a heavy contrast from a human being; making it almost impossible to practice certain techniques that are thrown from angles such as uppercuts. And the shape is extremely uniform, that it requires different types of distancing and timing that’s used against a live person.

Fortunately, there is a heavy bag that allows for the same mobility and resistance as a normal heavy bag and also for you to throw punches from other angles as well as other techniques. Ladies and gentlemen, allow me to introduce you to the 3-N-1 Heavy Bag by Fighting Sports. 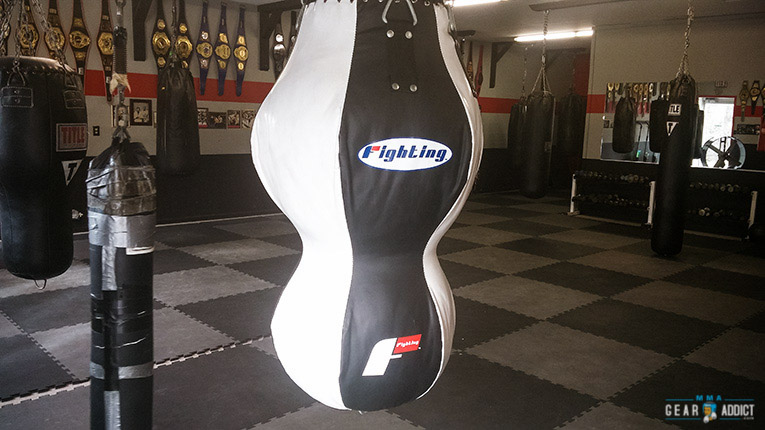 The Fighting Sports 3 ‘N 1 Double End Heavy Bag is a curvilinear, bubble shaped bag that has contour similarly match to that of an opponent in a fighting position. The center of the bag is tapered inward, roughly around the same area that sternum would be located below the ribs.

With the bottom of the bag expanding outwards being almost completely round; simulating the navel and kidney areas. There is a ring located at the very bottom of the bag in case you want to tether from below or potentially hang it upside down. Unfortunately for the fighters out there that like to emphasize training low kicks a, this bag is very short and length a focuses on striking from the waist up. 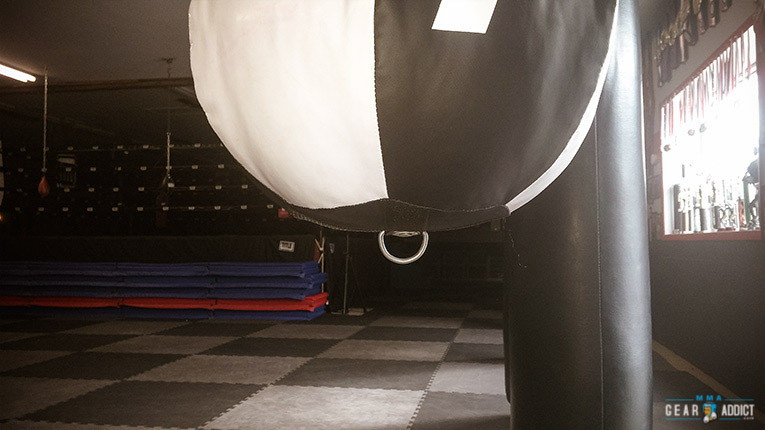 The top of the bag expands outward with a much larger circumference than the rest of the bag where the head and guard of an opponent would be; which also bevels inwards at the very top, where there are four straps used to connect it to a chain and/or spring. It’s a very unique rendition of a heavy bag. It’s almost indicative of an old school Coca Cola bottle design. It looks as if two bell style heavy bags of different sizes are melted together.

The Fighting Sports 3 ‘N 1 Rock-It Double End Heavy Bag is lighter in weight in comparison to most heavy bags. It can take some heavy shots in conjunction with excessive combos, but it’s not hard to send this bag swinging through the air; especially with kicks. Perhaps if your heavy weight bag moves a little too much for your liking; you can always secure it from the bottom, so that it doesn’t move too far from the radius.

It has a thick fabric/nylon exterior that’s sewn tightly together. This is good because the bag won’t flake and peel overtime due to wear and tear, unlike others with rubber and plastic exteriors. But I hypothesize it may begin coming loose at the seams from long extended use.

This is my favorite type of heavy bag, because I feel as if I get much more work out of it and it allows me to use some more techniques freely, compared to others.

I did speak earlier about it being less heavy than other bags. I believe this to be a very good thing because in my school of thought, both the fighter and the bag should move as much as possible. If you hit the bag, and the bag moves out of range; you move and adjust with it. Skill fighters won’t stand in front of you and allow you to take free shots. And this practice helps with timing on opponents; both approaching and retreating, regardless of how heavy of a bag you use.

Basics are always going to be paramount in ring sports, but it is also very important to be as savvy a fighter as possible. Uppercuts, shovel punches and overhands are very useful techniques that can give you an edge over your opponent and perhaps even turn the tide in a fight.
The bevel shape bag allows fighters to throw uppercuts and over hands (fists and elbows) as well as other techniques from different angles, almost to the same effectiveness as if they were hitting focus mitts. The swollen top half of the bag works as a target for headshotsThe tapered center of the three in one bag is the most excellent kind out there for practicing knees. This bag requires the user to fully trust their hip inwards and upwards while throwing knees. The way you would have to throw a knee to optimally hit your opponent in the sternum.

This bag may not have too much appeal to Kickboxers, Muay Thai and MMA fighters that revolve their game around low kicks. But on the flip side, for the fighter that puts an emphasis on kicks that go above the waist: this is the perfect bag for you.
It takes much more energy to throw kicks above the waist in comparison to low kicks. Even though I compete in all styles that utilize low kicks, as a personal preference; I primarily practice kicks above the waist to help increase my endurance and flexibility, which allowed me to have an edge over my opponents and overall leg stamina one hundred percent of the time. 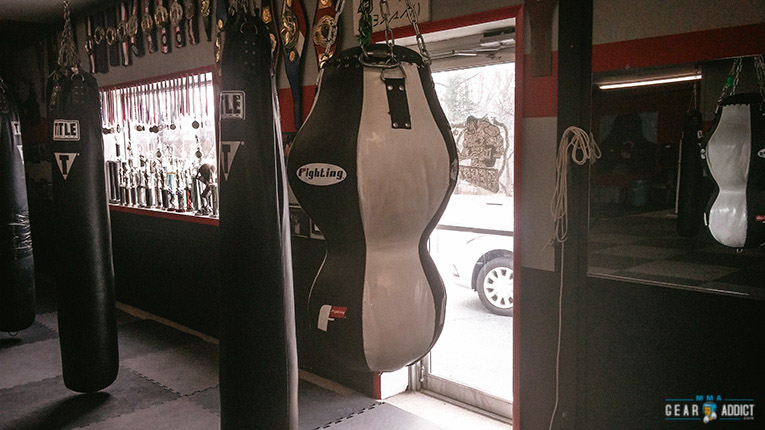 While there are pros and cons to any heavy bag you can use, the Fighting Sports 3 ‘N 1 Rock-It Double End Heavy Bag has more to offer than any other bag that I have seen so far on the market.

Out of all the bags I've ever used in my eight years plus of training , this is easily my most favorite. Admittedly it does not fully accommodate fighters who's styles primarily focus on low kicks and power. But it provides some type of benefit, regardless of what your fighting style may be. If you are looking for a different kind of bag to add to your gym, I strongly suggest picking this one up.

Fighting Sports double end heavy bag was bought at our gym for the full price. This did not influence the outcome of the review, which was written after several months and many rounds of training.

Out of all the bags I've ever used in my eight years plus of training , this is easily my most favorite. Admittedly it does not fully accommodate fighters who's styles primarily focus on low kicks and power. But it provides some type of benefit, regardless of what your fighting style may be. If you are looking for a different kind of bag to add to your gym, I strongly suggest picking this one up.