However there are many fighters and instructors that aren’t knowledgeable about the different types of heavy bags, and the types of benefits and advantages they can provide both the fighter and the trainer. One of these said heavy bags is the Title Extra Wide Load Body Bag (TEWLBB). 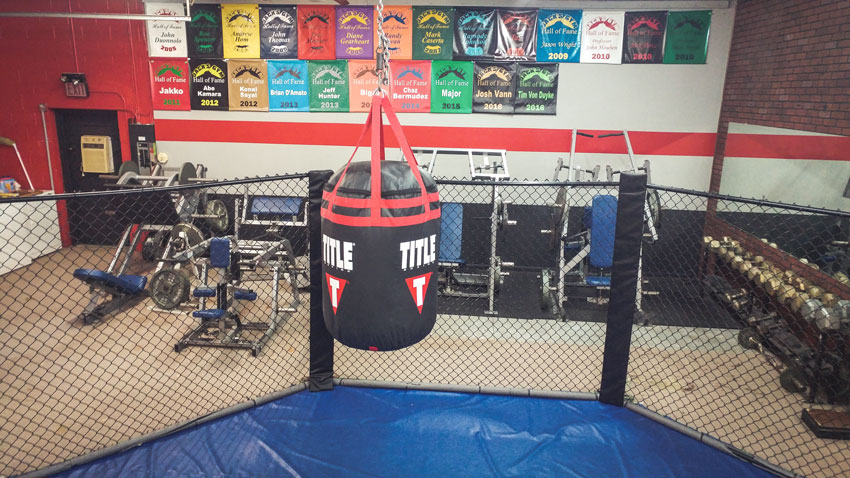 As the name would suggest, this Title Extra Wide Load Body Bag is very similar to a normal heavy bag in terms of dimensions. But is has a much larger diameter. Sadly, it isn’t long enough in length for those who want to practice leg kicks. It has 4 straps at the top which you can attach to a spring and/or chain. As well as a hook at the bottom to secure it for extra stability. However I wouldn’t recommend doing so because I am a firm believer in non-stationary heavy bags.

The color scheme is very simple; primarily black with red stripes and white text. Aside from being incredibly large in width, there isn’t anything notable about the design of this heavy bag. Its as durable as any heavy bag you can find on the market. But be warned, this bag is extremely heavy. So don’t attempt to assemble it without 3 people at least.

Even though there isn’t anything uncommon about the design of the TEWLBB except for it size. It does provide several applications that a traditional heavy bag would not.

Instead of having two people take turns on a heavy bag which is normally the case when two people are drilling on the same bag. Two people can drill both cardio and technique drills at the same time without having to worry about colliding shots with one another. And my school of thought, I don’t believe that someone should have to hold a bag for another individual. And a real life scenario, Target is not stationary. Plus holding a bag for someone else going to work out it’s just an excuse for somebody to take a break instead of getting more work.

For the Heavyweights, Super Heavyweights, or those of uncanny punching power, this bag is the heavy bag for you. It can take massive blows with easy. If not a heavy set fighter, you’ll find this bag just as, if not more useful. I have stated in other articles that it is best that your heavy bag moves when you hit it because it emulates the natural reaction of another person being hit.

When working TEWLBB, it won’t move it that much due to its size and weight. But just because your heavy bag doesn’t move that much does it mean you don’t have to. There are too many people that like they’re heavy bags to remain stationary, and also like to remain stationary in front of their heavy bag while attacking it as well. This can be a very bad habit to have because it creates a false sense of security for someone that goes in the ring or the cage thinking that their opponent is going to remain stationary or that they will have the privilege of remaining stationary without being punished.

The TITLE Extra Wide Body Bag is an excellent bag for practicing your lateral movement while attacking a Target. Footwork and spatial agility are imperative elements to keep in mind while working on the heavy bag.

In conclusion, I know only recommend the title extra wide load body bag 4 practitioners to use but also instructors and gym owners to have as well. It's sturdy, built to last, and provides much more utility than your standard heavy bag.

In conclusion, I know only recommend the title extra wide load body bag 4 practitioners to use but also instructors and gym owners to have as well. It's sturdy, built to last, and provides much more utility than your standard heavy bag.