Are you in a hurry? Here is the best all-around choice for wrestling and boxing shoe: 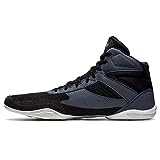 You can use wrestling shoes for boxing without any problem; that’s what I know Floyd Mayweather does, and many other pros and amateurs.

A decent pair of boxing shoes can make all the difference when you are in the ring, but many people find themselves a bit lost when trying to figure out what they need. Websites sell many different kinds of them, and like all shoes you buy over the internet, sizing can be a nightmare. When you want to try some on and see how they feel or fit, you might go to your local sporting goods stores to find that none of them carry what you are looking for.

You might not know that most sporting goods stores carry a pretty good alternative: wrestling shoes. In American high schools, kids might have classes like home economics, which will teach them to cook, or workshop, which will show them how to work with power equipment and wood materials.

While many American high schools don’t allow boxing programs for liability issues, most of them have wrestling programs. This makes wrestling shoes a higher-demand item in most cities, meaning that wrestling shoes are usually available in many sporting goods and large selection shoe stores as well as online retailers.

Related: 8 Things To Look For in Boxing Shoes For Kids

Wrestling takes place on an indoor matted surface, and a wrestler requires traction similar to that of a boxer. However, while the shoes are very similar in material, traction, and weight, there is one major difference. Boxers often need quick lateral movements to avoid punches and get around their opponent’s guard. Still, wrestlers must avoid being wrenched in different directions so their opponents can’t throw them around.

This leads to traditional boxing shoes having treat patterns that only point in a forward direction, so any step forward or backward has maximum grip. In contrast, a lateral movement that involves sliding the foot has the least resistance possible. On the other hand, Wrestling shoes tend to have tread patterns that extend in a star pattern from the ball of the foot, enabling them to have traction no matter what angle their foot is receiving pressure from.

Many people interpret that wrestling shoes are specifically made in an opposing style to one of the qualities that boxing shoes strive for to mean that wrestling shoes are inferior in a boxing application, but that is not always the case. Many boxers prefer traction in all directions and specifically buy wrestling shoes for the added stability they feel when forced to change directions in the ring quickly. This means you have some choices, but hopefully, the following points can make some of them easier for you with the right information.

Do you feel your footwork involves lateral movement that would benefit from reduced traction when sliding your feet from side to side? If so, maybe you would prefer traditional boxing shoes. If you are someone who often loses their footing or utilizes a wider stance and quick side-to-side direction changes, you might prefer wrestling shoes.

Sizing is fairly similar between wrestling and boxing shoes. Even if you prefer a set of traditional boxing shoes, you should still consider going to a sporting goods store and trying on some wrestling shoes to determine better what size you should order. If you have a pair of Nike running shoes, I have noticed that most boxing/wrestling shoes tend to be fairly close to Nike’s standard.

This is especially true for any Nike brand boxing shoes. Ultimately, you will always know if a pair of shoes you have already tried on will fit you, while the ones you order online are a mystery until they arrive. 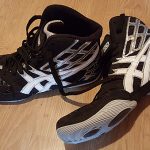 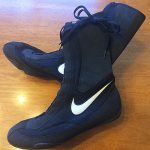 Both wrestling shoes and boxing shoes fall within a broad spectrum of pricing. However, neither one is significantly cheaper or more expensive than the other. Expect to pay between 50-100 dollars for a decent pair of either.

One thing that throws many people off, and therefore throws off the reliability of their reviews concerning the quality of any given pair of boxing or wrestling shoes, is how quickly they wear out. Many people assume that if they purchase a more expensive pair of shoes, they should last longer.

The problem with this logic is that the quality of the shoe is not at all relevant to how long it lasts, but rather how well it performs at its task, that is, how well it provides you stability and traction in the ring.

Usually, boxing and wrestling shoe companies utilize softer compounds in their manufacturing process to construct the soles of their shoes. Unlike running shoes, which have hard soles on pavement, boxing and wrestling shoes are not meant for long-term abuse and don’t have deep treading for water displacement. This means that no matter how well the shoe is constructed, it will wear out quickly. It is an unavoidable fact when choosing to make this purchase.

To maximize the life of your shoes, ensure only to use them inside and never use them for running. You should have a dedicated pair of running shoes for this. 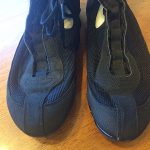 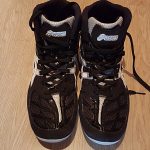 Both boxing and wrestling shoes come in hi-top/boot and lo-top varieties. What you should purchase depends entirely on the type of support that you require. If you are the type that frequently rolls your ankle, you might consider wearing a higher shoe. Many people find a higher shoe too constricting to their freedom of movement, in which case they might prefer a lower cut.

However, you should remember that nothing restricts your movement more than a twisted ankle at the wrong moment. Again, I suggest trying on wrestling shoes in both varieties at your local sporting goods store before making a final decision.

In conclusion, I can only say that unless you are extremely picky, both types of shoes will probably perform perfectly well in a training environment.  I have worn both types and have not noticed an extreme difference.

Having boxing or wrestling shoes makes a world of difference over wearing a shoe that is not meant for traction on canvas or mat, but remembers that splitting hairs over the direction of the traction is not as important as developing proper footwork in the first place.